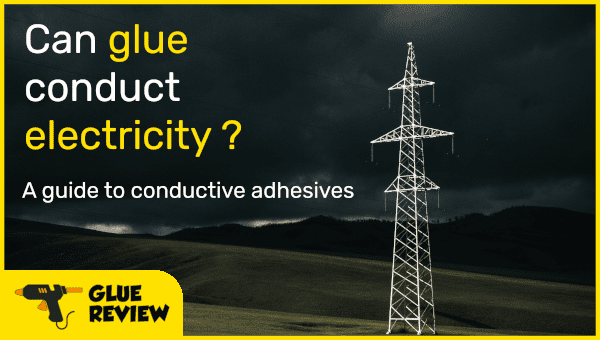 Does glue conduct electricity? If you’re working with electrical appliances or circuit boards, this is something you need to be aware of.

With very few exceptions, glues and adhesives do not conduct electricity. Most glues are manufactured from petroleum products, so they have similar properties to any other plastics once cured.

The exceptions to this rule are usually specifically formulated adhesives designed to be conductive.

What type of glue conducts electricity?

Very few household glues are conductive at all, with the exception of a few adhesives that were specifically manufactured to be a user-friendly replacement for soldering.

Conductive glue is normally known as wire glue, metallic glue, or solder glue. They are designed to be used as a replacement for soldering and contain silver, copper, iron, or some other conductive metal.

Although these conductive pastes are more conductive than regular adhesives, they are a bit of a compromise.

Can I use glue instead of solder?

Depending on what your requirements are, it may be better to use solder instead of a metallic conductive glue.

If conductivity isn’t an issue, you would be better off using a two-part epoxy designed for metals like JB-Weld. It’s stronger than any conductive glue you can get.

For electrical components where conductivity is important, a conductive wire glue may be a viable alternative to soldering.

Wire glue is suitable for low-power projects, such as a light switch or a battery connector. It’s not suitable for anything that takes mains power, as it can not handle the same amperage and may lead to a potentially dangerous fault.

The gluesticks used in hot glue guns are made from polyurethane, a type of plastic that is an electrical insulator. Hot glue guns do not conduct electricity.

Hot glue is good for insulating from electrical circuits and is often used to attach components to a circuit board without fear of creating a short.

Can I use glue on a circuitboard?

Glue is best used on a circuit board for attaching components, not as a replacement for solder.

When dealing with such small electrical signals, it’s important to have a proper connection between components.

Use solder to attach the connectors, and glue to hold them in place if necessary.

If you’re using hot glue, make sure to use it at the lowest temperature so as not to damage any other components.

Avoid using any glue with a strong solvent, since it may damage plastic and silicone.

Any Cyanoacrylate (super glue) will not conduct electricity.

When super glue dries, it becomes just like a hard plastic. Electricity won’t pass through it.

While it’s wet, theoretically it may be electrically conductive – however CA glue dries extremely quickly, in a matter of seconds.

The metals used vary but are usually silver, copper, or iron.

No matter which conductive glue you choose, you are sacrificing adhesion for conductivity (as more metal is added to the mixture) or vice versa.

Note:
JB-Weld is infused with steel and is advertised as a replacement for welding. JB-Weld is a very strong two-part epoxy, but it’s not an electrical conductor.

Usually, it’s not a great option due to price and conductivity.

It’s less conductive than soldering and can be very expensive, especially those containing silver or copper.

In general, I would recommend not to waste your money on these glues, and get a cheap soldering set from Amazon instead.

Hope this was useful for you.