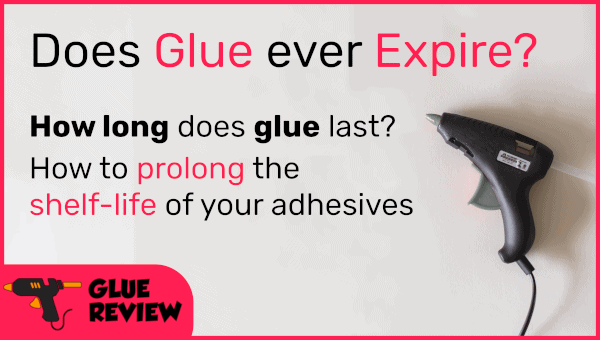 Ever opened up a 10-year-old bottle of glue? What would happen if you did? Let’s find out how long glue lasts, and how to prolong the life of your adhesives.

If you check the packaging of most household glues, you will see that glue does expire. Most glues are advertised to have a two-year shelf life, although in practice it can be perfectly fine to use after that, depending on the type of glue and how it’s been stored.

So glue does expire, but what exactly does that mean? What would happen if you used a glue after the expiration date?

In this article, I’m going to explain what happens to different types of glue when they expire, how long you can expect them to last, and how you can prolong the life of your adhesives as much as possible.

How to find glue expiration date:

Household glues usually have a long expiry date of several years, and sometimes manufacturers don’t publish an expiration date on the packaging.

Instead, on most packaging, you can find a “production date” which lists the date the adhesive was manufactured.

Occasionally, this is also not printed in a readable format, but instead is a long string of letters and numbers. This is called a coded date, and unfortunately, there’s no standardized format for the codes.

If you find a coded date, you can find out how to read them from the manufacturers’ websites. For example, the first letter may correspond to the month the glue was produced, while the second number may correspond with the year.

This is not super useful if you have an old bottle of glue and want to know if it’s still good, but for most glue, you will be able to tell by looking at it whether it’s good or not.

Check the table below on this page for a list of glue types and their typical shelf lives.

In this section, I’m going to list the shelf life of different types of glue.

Please read the information underneath the table for some important caveats. If you have glue that’s older than what’s mentioned here, it may still be fine to use with a little bit of prep work.

Every brand has its own measurement and suggested expiry dates, these shelf lives are a rough estimate based on the type of glue and not based on the specific brands.

PVA makes up white school glues and most wood glues. PVA has a shelf life of roughly two years while still sealed. After a few years, there are two possible options for what’s going to happen to your PVA when it expires:

1: PVA may harden inside the bottle if exposed to air

This happens when air is able to get into the bottle. Even an airtight seal may degrade over time and eventually allow a tiny amount of air to seep into the bottle. If this happens, the PVA glue may harden and become unusable, essentially turning into a lump of plastic.

Unfortunately, there is no way to reverse this process once it has happened.

2: PVA may separate inside the bottle

This happens when the glue is left for a long time in one place, without being disturbed, but without being exposed to air (kept in an airtight container).

PVA glue is an emulsion, which means the glue itself (the PVA part) is suspended in a solvent (usually water). The glue works when the water is allowed to evaporate, leaving the PVA behind to form a strong bond.

Essentially the process here is that the adhesive and the solvent separate into different layers. You might have seen this happening with paint too. When PVA is allowed to separate like this the PVA clumps together and forms a solid plastic, making it unusable.

If you catch this early on, you may be able to thoroughly mix the PVA, and remove any already congealed lumps of PVA by pouring the glue through a sieve. However, the remaining glue will have less adhesive and cohesive properties than the original.

Cyanoacrylate (also known as Superglue) is highly reactive, and difficult to store for a long time.

Theoretically, in a sealed, air-tight container CA glue could last for several years however, in practice this is rarely possible. Even in a manufacturer-sealed container that has never been opened, eventually, enough air will seep into the container and allow the superglue to harden inside the bottle.

Once this happens, there is no way to reverse it.

Realistically, you should reasonably expect to be able to use a CA glue for up to a year after it was manufactured, provided the container remains sealed. Once the tube is opened, it’s extremely difficult to prevent superglue from hardening, because it’s so reactive. Once the container is open, Superglue will usually harden within a few weeks, depending on the humidity of the storage environment.

CA glue works by reacting with the moisture in the air, so unless you can seal it in a perfectly air-tight container with zero moisture, it will eventually react.

Therefore, the best option for CA glue is to buy a small amount and only open as much as you need.

It’s usually sold in small 10ml – 25ml containers for this exact reason. Some manufacturers sell larger volumes but sell it separated into several containers in the same pack, so you can open what you need and keep the rest sealed.

In spite of this, PU glues are less reactive than Cyanoacrylate, so you can leave Polyurethane for much longer periods in a sealed container.

Realistically, Polyurethane glues have a shelf life of between one and two years in an air-tight sealed container, reducing to around a year at most once it’s been opened and exposed to the air.

The best way to keep Polyurethane from going off is to keep it sealed as best as possible, and away from UV and moisture.

How to prolong the shelf life of glue

Although different glue types have different chemical makeups, there are a few rules of thumb you can use to prolong the shelf life of any type of household glue.

Does glue go off? Unfortunately: Yes.

Glue has a super long shelf life, but eventually, it does go off, although exactly how it happens is slightly different for each type of glue.

Emulsion PVA-type glues, like school glue and wood glue, go off after a year or two when the solvent (usually water) starts to separate from the adhesive (PVA). The adhesive sticks together in clumps, forming basically hard plastic and making the glue unusable.

Superglue and Polyurethane glues (like Gorilla Glue) go off by reacting with moisture. Superglue is much more reactive, reacting even with the small amount of moisture found in the air.

Any glue that’s in a liquid form won’t be able to last forever, unless it’s kept in lab conditions in a completely air-tight vacuum chamber, and prevented from settling and separating over time.

Realistically, household glues can not stay usable forever, although they usually have a long shelf-life of a few years or more.

Once the glue has been applied and has had a chance to fully cure, it can last for an extremely long time. Of course, it depends on the type of glue and the environment it’s in. Some glue degrades in UV light, others degrade in water (or humidity), movement, or even just when exposed to the air.

Modern synthetic glues form a solid plastic once cured. This plastic is usually not biodegradable, so it can remain solid for hundreds of years.

The oldest surviving glues we know of are most likely animal glues. Animal glue was used historically to bind books, to create musical instruments, and to strengthen joints in furniture.

Some antique furniture restoration projects use animal glue to blend in with the existing glue, which may have been there since the furniture was created originally hundreds of years ago.

Most modern glues are synthetic and made from oil products. These glues are essentially plastics and thus are not biodegradable and should not be disposed of in the public water systems or left in nature.

Some glues like hide glue, which is made from animal parts are biodegradable and dissolve in water.

You can check the shelf life of various glues in the comparison table above.

You can prolong the life of your glues by keeping them sealed for as long as possible, and by storing them correctly – away from heat, moisture, and direct sunlight. 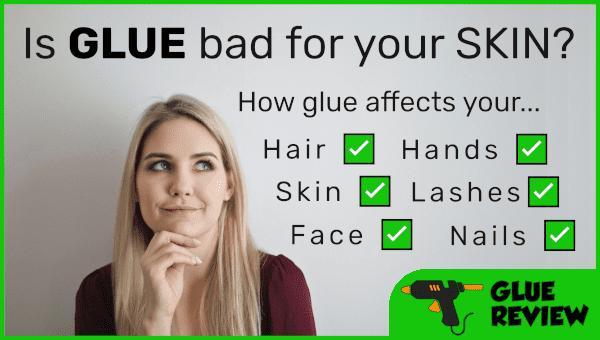 Is Glue bad for your Skin? 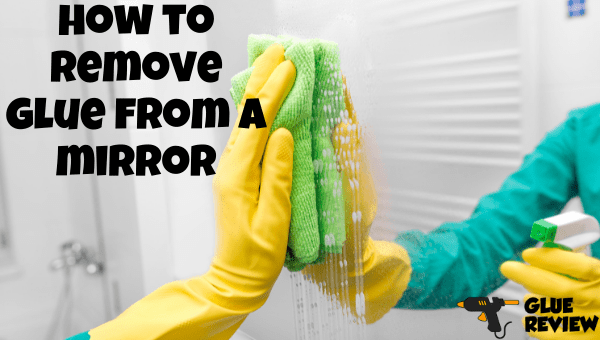 How to remove glue from mirror?
Menu