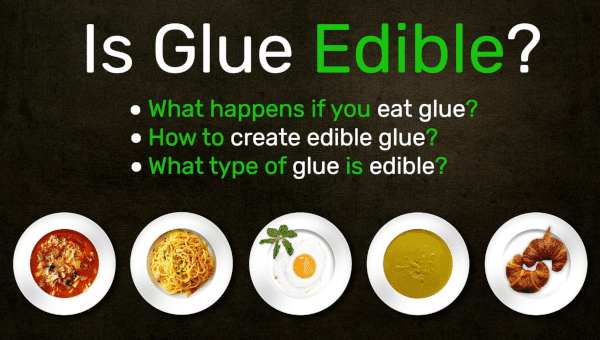 There are some misconceptions about edible glues, especially around school glues. The truth is, no household glues are actually “edible”. Let’s find out why, and what to do if you need edible glue.

No household glues are edible.

Even non-toxic glue like Elmer’s School Glue is not classed as edible, because it’s not a food, and although it may be non-toxic, it may still cause digestion problems and an upset stomach. A rock is non-toxic, but you wouldn’t eat a rock, would you?

There are some specialist glues that are edible, usually used in the food industry. These are usually plant-based glues such as Acacia Gum and are completely edible and regularly used in food production. These glues are typically not very adhesive though, it’s not the type of glue you could use to put up a shelf or something.

While PVA on its own is non-toxic, and most School Glues are perfectly safe (were you to accidentally eat some) it’s not safe to assume the same is true for every PVA glue, and no PVA glue is really classed as “edible” even if it is non-toxic.

The reason for this is that many PVA glues are not solely made up of PVA. Most glues marketed for kids (like Elmer’s School Glue) are non-toxic and food-safe, but many other PVA glues (especially woodworking glues) are not.

Some glue contains additional chemical ingredients which affect the properties of the glue to make it more useful for different jobs.

Manufacturers add these chemicals to the glue to affect things like drying time, viscosity, drying color, and water resistance.

While PVA itself may not cause any lasting harm (apart from some unwanted effects when you go to the bathroom), the additional chemicals present in many PVA glues mean it is not safe to assume they are harmless without checking the packaging.

The one exception to this is that most School Glues (such as Elmer’s School Glue) omit any additional chemicals, and are made of purely PVA and water. Check out the section below to learn more about Elmer’s and other School Glues.

Elmer’s School Glue is food-safe and non-toxic, so if you accidentally eat some it’s not going to cause any permanent damage, but it’s not classed as edible because it’s not food, it has no nutritional value, and your body can not digest it.

Let’s break down these two terms and see exactly what they mean.

(Compare these definitions to the definition of edible, which is something that can be broken down by your digestive system to provide energy)

Non-Toxic means that if you were to accidentally ingest PVA glue, it would not make its way into your bloodstream or react with any of the cells in your body.

Basically, it will pass through without causing any lasting damage, although since it can’t be digested it might cause some unwanted side effects when it finally exits your body in the bathroom.

Food-safe means that once it’s cured, the glue basically turns to an inert hard plastic, which is safe to use in situations where it might come into contact with food. (Like in a kitchen)

In other words, if you had something to repair that was going to be touching food, like maybe a paper container or some kind of food storage shelf, it would be safe to use Elmer’s glue for your repair because the glue won’t react with the food.

So can you eat Elmer’s glue?

Although Elmer’s glue is non-toxic, it’s not really “edible” and you shouldn’t eat it. Think of it like plastic. Plastic isn’t edible, but it wouldn’t cause you any lasting harm if you were to accidentally eat some.

Your body can not break down PVA glue, so it will pass right through you without reacting or making its way into your body, just like plastic would.

It has no nutritional value, and since your body has no way of breaking it down.

In practice, what this means is that it may cause you some unwanted digestion issues when you go to the bathroom.

What types of glue ARE edible?

Most of the time, what we think of as “glue” is not edible.

Anything you can buy from a hardware store = not edible.

Anything not specifically designed for food or baking = not edible.

However, there are a few specialist food glues available, which are specifically designed to be used in cooking and baking. There are a few different types, they are usually made from plants and aren’t very strong.

Acacia Gum is a plant extract created from the sap of the Acacia tree, found in northern Africa.

The gum is used often in the food industry, usually as a stabilizer, but sometimes as an adhesive too.

It’s used to attach the paper to an ice cream cone, or to seal the paper wrappers of candies.

Acacia Gum usually comes in a fine powder, which makes it easier to dissolve.

It’s fully edible and tasteless, making it a great option for food.

It’s not very strong, but it’s a great option to use for wrapping foods. If you wanted to attach a ribbon around a cake, you could use this type of glue to attach it.

Another type of edible glue is a favorite for school and art projects.

A simple mixture of flour plus water makes a paste that is strong enough to hold paper together once it’s dry.

This works because the water starts to break down the flour, extracting the proteins and dissolving them into the water.

When the water evaporates, the flour and the sticky proteins are left behind, acting as an adhesive.

You can see this same effect in your breakfast cereal. If you’ve ever forgotten to wash your cereal bowl straight away, you will notice the cereal becomes super hard and stuck to the bowl once the milk evaporates.

This is really stretching the definition of “glue” but it is still something sticky used to hold things in place, so we’re going with it.

The type of glue usually used in decorative baking projects like gingerbread houses, cakes, and cookies is a mixture of icing sugar and water.

Similar to paper mâché glue, this mixture works by extracting the proteins and sugars from the icing sugar and dissolving it into the water, to make a sticky paste.

When you apply the icing sugar, as the water evaporates the sugar icing hardens, holding whatever it’s attached to in place.

This type of edible glue is perfectly safe to eat and delicious. It’s often used in cake making, gingerbread houses, to attach decorations to cookies and other decorative projects.

You can mix in some food coloring to change the colors too.

Is the glue on Ice Cream Cone Wrappers edible?

The glue on ice cream cone wrappers is completely edible. It’s usually made from Acacia Gum, a natural plant extract made from the sticky sap of Acacia Trees which is widely used in the food industry.

If you’ve ever had ice cream from McDonald’s or Dairy Queen, you may have noticed a little bit of residue left on your ice cream cone after you remove the wrapper.

This is nothing to worry about. The FDA requires the paper, ink, and the glue to be food-grade. The glue on ice cream cones is completely safe, and it won’t do you any harm if you eat it.

Glue sticks are usually made from PVA, the same as Elmer’s Glue. The difference is the viscosity. Glue Sticks are more viscous and waxy but are usually still food-safe and non-toxic.

Of course, this depends on the brand but most glue sticks are designed for kids and crafting, so they usually adhere to the requirement by the FDA that glues used in Schools must be non-toxic, in case a child accidentally eats some.

Although they are mostly non-toxic, it doesn’t mean you should eat them. The waxy glue is more likely to form a blockage in your digestive system since your body has no way of breaking down PVA.

No, superglue (cyanoacrylate) is not edible.

Superglue is unsafe to eat because it’s highly reactive. If you were to swallow or ingest liquid CA, it would react instantly with the moisture in your mouth and throat. Hopefully it’s obvious why this is extremely dangerous.

Once superglue dries, it becomes a hard plastic. If you were to somehow eat a piece of dried super glue, it would be just the same as eating a piece of plastic. It would pass through your body without reacting.

No household glues are edible. Even the non-toxic and food-safe glues like Elmer’s glue are not edible. It might not cause direct harm, but it will give you unwanted digestion issues when you go to the bathroom.

If you need an edible glue for cooking or baking, use one of the edible food glues like Acacia Gum instead. (You can buy it at Walmart or Amazon)

Hope this article cleared up some misconceptions about edible glue.