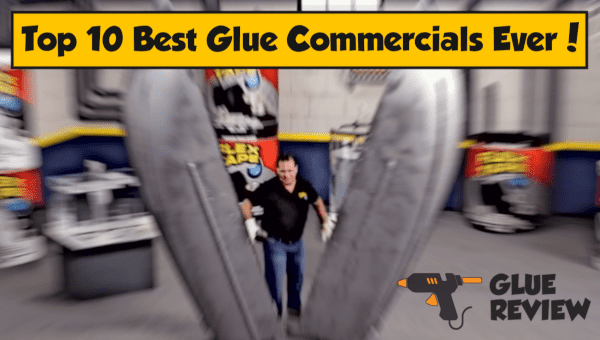 Check out these insanely creative and clever advertising campaigns from some of the world’s most known (and some unknown) adhesive brands!

“Stopping advertising to save money is like stopping your watch to save time.” – Henry Ford.

Global brands understand the power of marketing, but some adhesives companies have pulled some insane stunts and made some awesome ads over the years.

Here are my top 12 ads for glue companies. #1 has by far the most successful adhesives marketing campaign I’ve ever seen!

In 2010 Krazy Glue released this epic ad featuring a bungee rope secured only by their product. It’s definitely memorable!

Elmer’s don’t go for the in-your-face extreme marketing of some other brands. Elmer’s is a family-oriented brand and their “Let’s Bond” campaign is a great nod to that.

Solvite is an adhesives brand that makes wallpaper paste. To demonstrate the strength of their product they had a number of TV spots where they suspended the general manager of the company above various dangerous situations, held up only by Solvite.

#7: That time Loctite spent their entire annual ad budget on a 30 second ad.

Loctite isn’t as well known in the USA as it is in Europe and in the commercial world. In 2015, Loctite sought to remedy that by blowing their entire annual ad budget on a SINGLE Superbowl commercial.

JB Weld created this ad to try to insert JB Weld into the public consciousness for home repairs and DIY and to try and shift their reputation away from just being for auto repairs. The end of the ad is weird and slightly unsettling, which got people talking about the ad. (If the youtube comments are anything to go by!)

This ad caused a stir when it was first aired in the south of France – a typically catholic region. Nuns in a covenant use Talens Rubber Cement to repair a statue of the lord after he has a little accident. Funny!

Alright so this one isn’t as flashy as some of the other ads here, but this ad is a rare glimpse at a marketing campaign from all the way back in the 60s! Elmer’s was owned at the time by Borden Dairy Company, which used a cartoon cow “Elsie” as their marketing mascot.

When their chemicals division created Elmer’s glue, the marketing team decided to leverage the already well-known and loved brand of Elsie the cow and create a new character to represent the glue – Elmer the bull.

The marketing team decided Elmer would be Elsie’s husband, and Elmer is proudly displayed on Elmer’s glue to this day.

Next up on our list is Sugru, the mouldable glue.

This campaign is interesting because it wasn’t a single ad, instead – Sugru started pumping out money to every corner of youtube. Creators from every niche were suddenly uploading Sugru videos, promoting unique ways the glue could help their viewers with clever hacks.

Sugru gave each of them a unique referral code that allowed them to earn a commission when their viewers bought the product. This was a super smart move from Sugru because it put them in front of so many different audiences and potential customers, several million customers for no significant investment. (Other than sending out free glue!)

The craziness of the Flex Seal infomercials spread like wildfire and memes popped up everywhere.

A lot of companies and celebrities go into damage control when they get unexpected attention online, trying to stop the spread of memes but Flex Seal fully embraced it, doubling down on the insane infomercials, responding positively, and encouraging the buzz created on social media and sponsoring other content creators to create ridiculous videos with Flex Seal products.

The result was a truly massive success, with Flex Seal videos, commercials, and both sponsored and non-sponsored response videos garnering hundreds of millions of views online from some of the biggest YouTubers with the biggest audiences on the entire internet.

This ad campaign is a perfect example of how companies should do internet marketing!

I hope you enjoyed this list. There are loads of amazing marketing campaigns but I don’t think any of them come anywhere close to the level of success as Flex Seal.

If you know of any other commercials, let me know so I can add them to the list!